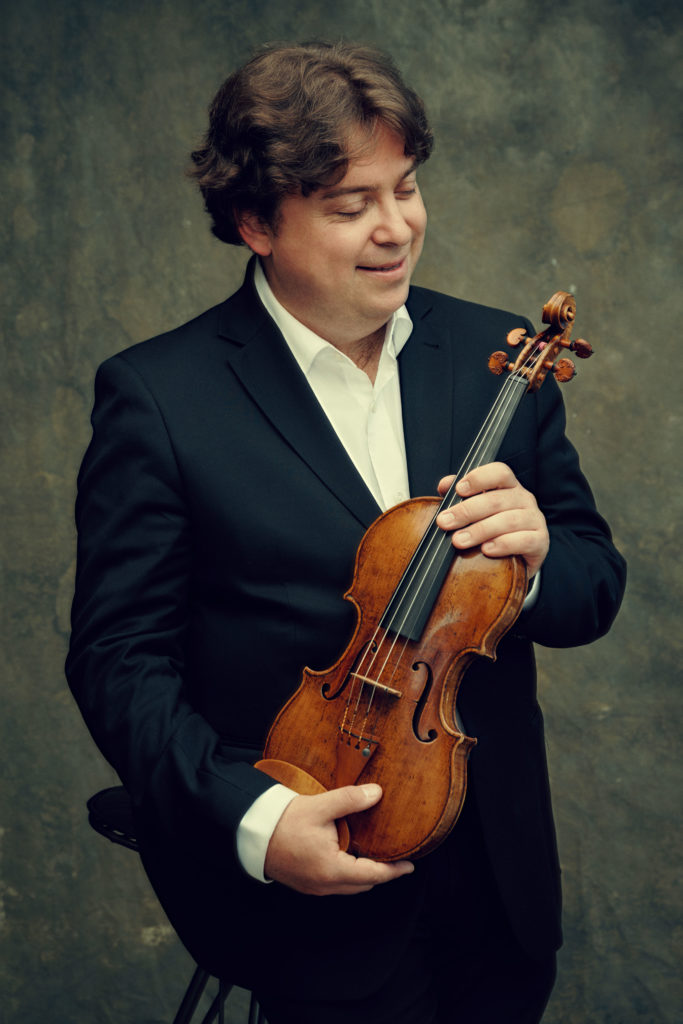 Described by Isaac Stern as “one of the most outstanding Israeli violinists”, Sergey Ostrovsky was born in Russia in a family of musicians. Today, he is managing an active and successful career as the first violinist and founder of the world-renown Aviv Quartet, a soloist collaborating among orchestras worldwide, as a conductor, as a Violin professor at Haute Ecole de Musique de Geneve, as well as a leader of the best European orchestras.

Following the founding of the Aivi quartet in 1996, Sergey has won top prizes at the International Competitions, such as the Grand Prix at the 3rd Melbourne Chamber Music Competition, Bordeaux String Quartet Competition, Prague Spring Competition, the “Schubert and Modernity” Competition in Austria, as well as the Israeli Prize of Ministry of Culture and Ministry of Education of Germany.
The Aviv Quartet appeared in every continent around the world, among venues such as Carnegie Hall and Lincoln Center in New York, Kennedy Center and Library of Congress in Washington, Sydney Opera House, Wigmore Hall, and Royal Festival Hall in London, Auditorium de Louvre and Theatre du Chatelet in Paris, Wiener Konzerthaus, Berliner Konzerthaus, Frankfurt Alte Oper, Cologne Philharmonie, in concert tours in South Africa, Australia, Canada, China, United States, Brazil, Poland, Croatia, Hungary, Austria, and many other countries. The Aviv Quartet participated in various festivals such as Verbier, Ex-en Provence, Storioni, Festival of Davos, Festival of Quartets in Luberon, Folles Journees de Nantes, and has recorded several albums , with label Naxos (F. Schubert, F.A.Hoffmeister, Erwin Schulhoff, Erno Dohnanyi), with label Aparté- Schubert Late Quartets, and Dalia Classics (Shostakovich Quartets). During their 25 years of a successful career, the group became known as one of the top-class string quartets around the globe.

In 2009, Sergey was appointed as a Violin Professor at the prestigious Haute Ecole de Musique de Geneve (previously known as the Geneva Conservatory) at the Neuchatel Branch. His students have won international prizes, and perform around the world as solo violinists, chamber musicians, and in leading European Orchestras.

Passionately involved in conducting, Sergey Ostrovsky has had the opportunity to conduct the Israel Chamber Orchestra, PKF Filharmonia Praha, Armenia Chamber Orchestra, Estonian Sinfonietta, Soloists of Nizhny Novgorod ( Russia ), as well as various youth orchestras of music festivals such as the Academia Internazionale du Catalunya in Catalonia, the Avetis Festival Orchestra in Geneva, the orchestras of the Haute Ecole de Musique de Geneve.From 2015 Sergey founded the Orchestra « Soloists of Neuchatel ».

Ostrovsky began his playing of the violin at the mere age of 6, inspired by the great talent and extraordinary musicianship of his father, Valery Ostrovsky, concert pianist, and professor, whose pedagogical touch and knowledge, assisted Sergey through the many years of his studies, not only by coaching, but as well, by accompanying him on piano from 1990 through 2002. Sergey began his violin studies with David Lapidus and worked with him for eight years. During these studies, Sergey made his first public concert appearance at the age of 8, made his performance debut as a Soloist with a chamber orchestra at the age of 10, and with a professional symphony orchestra at the age of 13,

Ostrovsky continued his studies at the Music College of Gorky Conservatory under the tutelage of Lazar Gantman and Yury Gluchovsky. In 1991, he immigrated to Israel with his family and continued his studies with Irina Svetlova and Yair Kless at the now Buchmann-Mehta High School of Music (Rubin Academy Tel Aviv). In 1998-2002, with the Aviv Quartet studied in Cologne Musikhochschule with the members Alban Berg Quartet, and with members of Daniel Quartet in Rotterdam Conservatory, where Ostrovsky completed his Bachelor Degree Diploma with Natalia Morozova in 2000 and completed his master’s degree diploma in Amsterdam Conservatory with Alexander Kerr in 2002.

Sergey Ostrovsky currently performs on a 1716 violin, made by Giovanni Grancinno, which was purchased with the generous support of Mr. James Mayer and “Tzfonot Tarbut” a non-profit organization supporting arts in Israel.